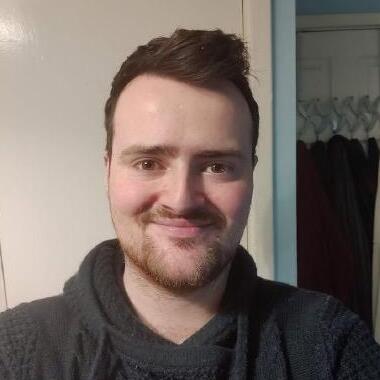 A Snap package for ROOT on Linux

There is a new experimental package format for ROOT, based on the Snap package manager from Canonical. This package can be ideal for new ROOT users, new Linux users, or people whose ROOT requirements might be entirely satisfied with an immutable container image.

Take a look at the store listing at https://snapcraft.io/root-framework, where you can find installations for some common distributions, e.g. Ubuntu, Mint, Debian, Fedora, OpenSUSE, CentOS, Arch, and more!

On Ubuntu, it is as simple as:

You might be able to even just search for the ROOT Framework and install it in a single click! 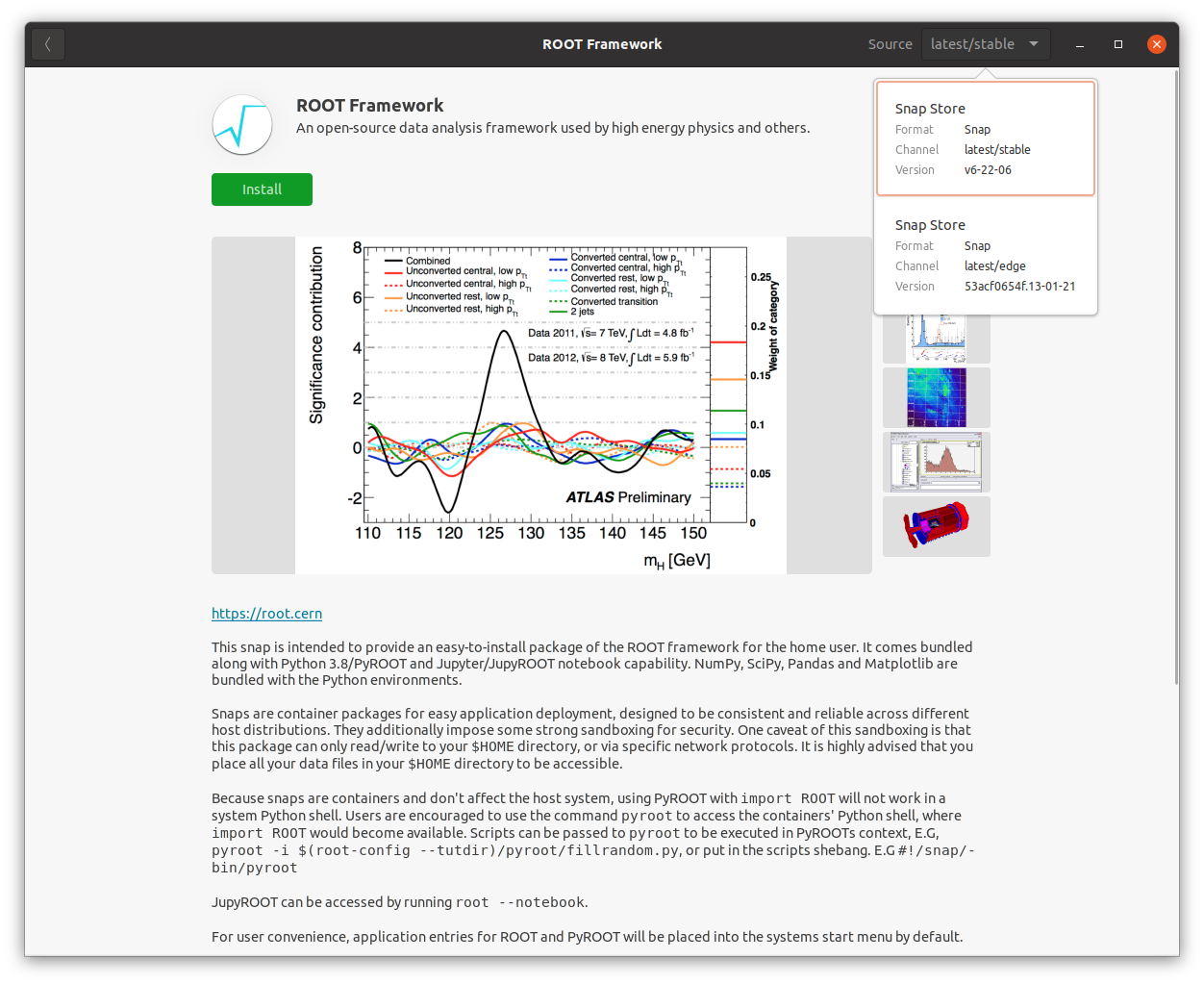 This is a full-fat installation of ROOT, complete with its utilities such as hadd, PyROOT via Python 3.8 (with SciPy, NumPy, Pandas and Matplotlib), and JupyROOT. You will get these bundled by default, and since the whole package is based on container technology, they cannot interfere with any of your system libraries and can be easily upgraded (automatically!), removed, and mixed alongside other ROOT installations.

Just run root in the terminal after installation and you can get to work instantly. Give root --notebook a go and try out the JupyROOT support. As a special case, if you want PyROOT, you must run pyroot rather than python. This ensures you get the bundled version of Python in the container rather than the host system, but from there you can import ROOT normally and run your scripts. You can also pass parameters to pyroot as if it were python, e.g. pyroot -i $(root-config --tutdir)/pyroot/fillrandom.py.

There is no need to mount the $HOME directory, graphical support should work by default, and a lot of optional packages are built by default. The goal is to provide a Docker-like experience for ROOT but blur the distinction between the container and host environment, in a way that is convenient for users. For example, by simply adding a shortcut to start ROOT in the start menu of most systems under the science section.

Most snap packages are under a sandboxing model that might subtly interfere with a user’s regular workflow. This means that the ROOT snap cannot just access a user’s camera or microphone for example, since this makes little sense for ROOT. However, one notable feature is that ROOT is limited to accessing files in the users home directory (aside from over the network). Furthermore, the snap will be prevented from accessing hidden files/folders in the top level of the home directory itself, such as $HOME/.ssh.

To help make this work, the $HOME variable, and gSystem->HomeDirectory() will return a modified value for the users home directory, generally /home/example/snap/root-framework/current/. If a user wants to make use of rootlogin.c for the entire application, keep in mind it will look for it in $HOME which points there instead. If you make use of the parallel installation ability mentioned below, this can be an advantage as each installed version of the ROOT snap will have a unique $HOME, and may have different rootlogin files, history, etc.

Snaps update automatically, using delta patches to be bandwidth efficient. Due to the container properties, this should be a safe operation, so that jumping from one version of ROOT to the next can be done even if it upgrades to an entirely different compiler toolchain.

If you are already using the snap and want to swap to the edge branch, use sudo snap refresh root-framework --channel=edge.

A track in Snapcraft terms is a separate branch of a project that can be downloaded instead of the default release. The default release is called “latest”, and its stable channel will generally follow the newest stable ROOT release. As a result, users will automatically update to newer branches of ROOT. However, in some scenarios people may like to use an older release, and tracks could be used to provide this in the future.

If there is a demand to produce these tracks, please provide some feedback and it can be looked into! The following example syntax would be usable if/when tracks are declared.

Multiple Installations of the ROOT Snap

This feature is still experimental, but it is possible to have both the ROOT stable snap and the ROOT nightly snap alongside each other. However to make proper use of this functionality, it helps to understand Snap aliases.

The root command itself is an alias, because the snap package is called root-framework. When installed from the Snap Store, an alias is created automatically between root and root-framework. For the other binaries such as hadd, the original names are namespaced, so hadd in the namespaced form is root-framework.hadd. When you install extra instances of a snap, you must decide which aliases you wish to use manually.

It is preferable to use Snap aliases rather than Bash aliases, a snap alias will affect all system users.

The additional installations of snaps will all have their own unique $HOME values, so can have differing rootlogin files and different history for each snap instance.

Officially, running snaps on WSL2 is unsupported. This is because WSL2 has a custom init system rather than systemd. Unofficially, it is possible to get it working reasonably well anyway, but this is not directly supported.

Having personally tried it, it is possible to get JupyROOT in the snap running in a web browser on Windows, and for some people, the snap on WSL2 might make sense.

Other virtual machine platforms, such as Virtualbox should be able to install Snaps without issues.

At the moment, CUDA is not supported, but this may change in the future.

OpenGL generally works fine in a Snap environment for most GPUs. A notable exception is amdgpu-pro drivers, and NVidia proprietary drivers on Debian and Debian derivatives (but excluding Ubuntu and Ubuntu derivatives). These issues can be resolved pending upstream work in the future.

There should not be any observable performance difference from the snap version of ROOT and any other version, a macro that takes an hour to run outside the snap should take an hour to run inside it.

Creating independent executables is not supported in the snap environment. The ABI is not stable, the compiler toolchain will be foreign to most systems, and the automatic updates would ruin this regularly even if you managed to hack it into working. If this is essential to your workflow, you are likely better suited with an alternative package.

Packages and executables outside the Snap container

Executing binaries from outside the snap environment from inside the environment itself will not work due to the sandboxing, and the image itself is by default inflexible, so that adding more Python modules for example involves either rebuilding the snap or using debug modes. If there are binaries and packages that might make sense inside the container, please give feedback and they can be considered to be default!

If you want to change the CMake parameters, add some extra packages or some extra Python modules, you might be pleasantly surprised with the Snapcraft build system and there are some instructions on my personal GitHub page on how to do it. https://github.com/MrCarroll/root-snap

Because the snap purposefully keeps its files away from the normal system, IDEs do not work with the ROOT snap. Consider using root --notebook to access JupyROOT for an IDE-like experience. If this is insufficient, you are likely better suited with an alternative package.

In summary, I hope there are a lot of users for whom a Snap package of ROOT might make sense. Prior to uploading this blog post, there are already several thousand downloads, going well above my personal expectations, and the issue tracker has not crashed yet so I am hopeful that it is being successful in helping get ROOT into people’s hands.

Please feel free to give your feedback on this package. Whilst not everything will be actionable, knowing what issues people have can help guide future improvements. In particular, feedback about additional python modules, issues with the sandboxing, and performance regressions are appreciated, though any feedback at all would be very much appreciated. You can get in touch with me on the ROOT forums as @james-carroll; or feel free to report issues at https://github.com/MrCarroll/root-snap, where you can also find information on building your own custom ROOT snap.

Special thanks go to Axel Naumann for being responsive and helping to reduce the bus factor of this package; thanks to my good friend Theodore Zorbas for giving me the inspiration to tackle this project and being my guinea pig for testing it, thanks to the ROOT community for already investing significant time in making ROOT easier to package, thanks to Canonical for the Snapcraft tooling, hosting, and build servers, and thanks to GitHub for their hosting and build servers too! Between Canonical and GitHub this entire package is built and distributed free of cost.